COP21 of the U.N. Framework Convention Form Agreement on Climate

In December 2015, an historic agreement was reached among 195 nations in Paris at the the 21st Conference of the Parties (COP21) of the U.N. Framework Convention on Climate Change (UNFCC) to combat climate change and work towards a low carbon, resilient future, calling to keep global average temperature increase well below 2 degrees C, and to drive efforts to limit the temperature increase even further to 1.6 degrees Celsius above pre-industrial levels. 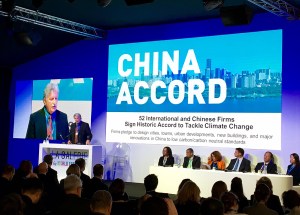 According the CEO and founder of Architecture 2030, Edward Mazria, who attended the conference, “it was incredible. For the first time governments came together to agree on a long term goal committed to keep global average temperature increase ‘well below 2°C above pre-industrial levels and to pursue efforts to limit the temperature increase to 1.5°C.’ What that means is we have to essentially end the fossil fuel era. We have to phase out all fossil fuel CO2 emissions by about 2050 and total emission by 2060-2080. We need to phase out CO2 emissions from power and industrial sectors by about 2050. There’s some leeway on...